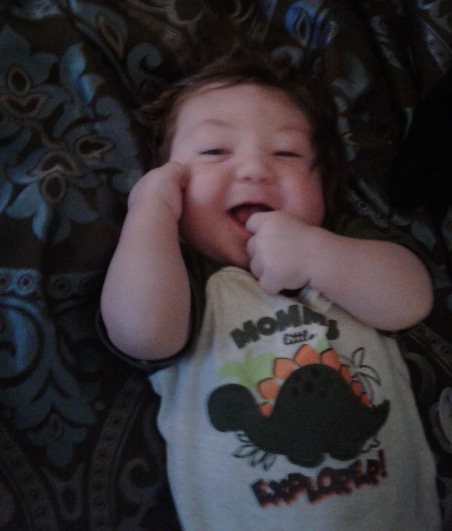 He is getting much stronger. He is becoming more aware of things, his surroundings, and seems more interested in them.

William had a very hard time from the beginning. When he was born, he had a lot of complications; not being able to hold any food down, jaundice, he even has such a low percentage of body fat that his body temperature was below normal. The hospital we went to was unfortunately not the best. They tested William for drugs of course, and when they found none in his urine, they even went as far as to test his poop, which they informed me would test up to 6 months back. I of course gave them whatever they needed and even after they found absolutely nothing I never got an “I’m sorry” or even an explanation as to why they did what they did. In one hand I understand why they did it, the number of children being born withdrawing off of something has gone up extremely in the past few years, but at the same time it really enraged me. And then that was it, after finding nothing in his system they just let us go home and no one looked or tried to find anything else.

At three months old, Will had barely gained half a pound and was still not able to hold anything down. He was finally sent to St. Louis’s Cardinal Glennon hospital and they diagnosed him with ‘failure to thrive’. After getting in touch with St. Louis things definitely got better/worse. They got better because we had a whole team of doctors actually trying to find what was wrong with him, and doing everything they could. At the same time it was a little worse, we live 2 hours away from St. Louis and have at least 2-3 appointments each week in the beginning. After seeing a plastic surgeon, an ENT, genetics, neurology, and gobs of others for almost 8 months we finally got a call from genetics to schedule an appointment. I remembered at the time remembering that they were only going to call if they found something, so it was a very terrifying yet exciting drive.

We found out in October of 2018 that William had MED13L, I think at first it honestly didn’t register with me what that meant. As she was telling me I was kind of excited that they had finally found something and we were going to get some things answered. Walking out of the building, after the appointment, I think that’s when it finally hit me that this disorder is why he is the way he is, and it finally hit me that he was not going to be a “normal” child. (Who wants “normal” anyway, right?) Since his diagnosis things have gone fairly well for us. He is getting much stronger, he still can not sit up on his own, or walk, but he just recently started going forward in his gate trainer. He is becoming more aware of things, his surroundings, and seems more interested in them.

For the first 15 months of his life he wouldn’t even make eye contacts with anyone, or anything. That is getting much better also. William had facial abnormalities, hypotonia, microcephaly, laryngomalacia. He thank God has not had any seizure activities, and so far no heart problems either. He also has a feeding tube, due to aspiration and the fact that his tongue (being a muscle) does not work properly. He eats baby food, some table foods though, and also thickened liquids. He only uses the tube to stay hydrated. William is only 18 months old right now (2019) so we have a lot more adventures/work ahead of us.

Thanks to everyone for your support.